Is a Bromine Spa Start up Kit Worth It?

One of those common questions that gets asked all the time is “can you use bromine and chlorine sanitizers together in the same pool or spa?” Luckily for those of you who want to do so or see some value in it, the answer is yes, but there is a caveat. While it is safe for the water to contain both bromine and chlorine sanitizers, you should never mix the two chemicals directly together as this will result in a downright dangerous chemical reaction. 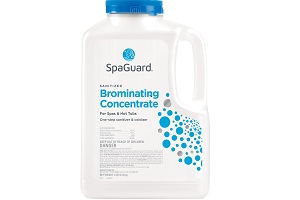 However, if you’re thinking about using a bromine spa start up kit with a spa that you use chlorine in, or vice versa, technically the answer is that you can safely do so as long as you follow the prescribed precautions.

However, if you’re looking for a comparison between the two options, be aware also that there are a number of reasons that bromine may be more valuable to you as a sanitizer. Therefore, you may find more value in a start up kit that uses chlorine to set the initial sanitizer levels before proceeding to use bromine routinely.

For one thing, despite the fact that bromine is more expensive than chlorine (at least up front) and it is also harder to come across these spa chemicals, it will last longer in the water than chlorine does. When chlorine kills contaminants it creates compounds known as chloramines and when bromine does the same, it produces bromamines. The difference is that chloramines are not active whereas bromamines continue to sanitize the water. In short, bromine remains effective for water.

Others will say that chlorine is better because it is more UV stable than bromine, which would be a weighty argument if it were not for a few key considerations. For one thing, people rarely use their spas in the daylight; spas are really more of an evening diversion, and even so, it is very easy to keep a spa covered in the daylight if you aren’t using it. Since pools are out there baking in the sun all day, the argument is valid here, but not so much with spas.

Now bring in the real heavy hitter which is the fact that bromine sanitizer is more stable under the influence of heat than chlorine is. What is it that spas are also called – ah, yes – hot tubs. Bromine will not only objectively remain active longer in the water as compared to chlorine when all other things are held equal. It is also more stable under the influence of heat.

So, whether you’re looking for an actual bromine spa start up kit for your hot tub or have decided you can get by with a chlorine based start up that will enable you to use bromine in the future, you’re in the clear, especially since chlorine is cheaper. A spa start up kit like the whimsically named Spa Frog Jump Start Packet will suit you well, setting the initial chlorine level for spas up to 500 gallons and it also extends the life of cartridges.

If you’re interested in learning more about how bromine tablets or granules can benefit you as a spa owner, or you’re just looking for some spa shock, a start up kit or some test strips, don’t beat yourself up looking for it. Visit HotTub.Club today – they have what you need.

Plus, they have a lot more than just products. They’re a veritable depot of valuable information that you can use when you need to learn something new about a process for your hot tub or pool. Selection is important to them, but so is customer service, so call them up any time at 1-866-546-8882.